The Kuroshio Current nurtures the forest of Amami Oshima

The island of Amami Oshima sits between the Japanese Archipelago and the Okinawa Main Island. It lies on international boundaries with China and Taiwan to the west, South Korea to the north, and the East China Sea in between. In addition, the island has been influenced by Okinawa and the mainland, and has long been a place where different cultures come together.

Its natural environment also serves as a boundary between the northern and southern limits of the wildlife habitat. An assortment of plants and animals live alongside one another, including a variety of endemic species found nowhere else in the world but Amami Oshima. In recognition of the biodiversity of the island, in 2021 it was registered as a World Natural Heritage Site together with Iriomotejima, Tokunoshima, and the northern part of the Okinawa Main Island. There are differences in the endemic species that can be seen even among the islands in this World Natural Heritage area. For example, the Iriomote cat is an endangered species that only lives on the island of Iriomotejima. Amami Oshima is 712.4 km2 and comprises less than 0.2% of Japan’s land area. Yet, the island is home to approximately 13% of the biological species in all of Japan.

Kijima: Amami Oshima was originally part of the Eurasian Continent. There are many endemic species that uniquely evolved here since the island separated from the continent around 2–12 million years ago because of movement by the earth’s crust. The most illustrative examples include the Amami rabbit and Lidth’s jay. Kijima: The rich forest has nurtured the plants and animals, but actually if you look at the world as a whole there are lots of deserts and dry regions along the same latitude.

The warm climate and Kuroshio Current that flows nearby produce plenty of rain on Amami Oshima, which resulted in the formation of a subtropical rain forest where broad-leaved evergreen trees like chinquapin and mangrove grow in abundance.

You can experience Amami’s natural environment up close in Kinsakubaru Forest.

The people of Amami respectfully live in harmony with nature

Kinsakubaru Forest can be reached by car in about 30 min. from Naze, Amami Oshima’s central city. To protect the environment, there is a rule that you must be accompanied by a certified Eco Tour Guide such as Mr. Kijima if you want to take a walk in the Forest.

Kijima: In the past, Amami Oshima has been damaged by the theft of rare plants and insects. Some of the endemic and endangered species are small plants that don’t stand out, so they can be unintentionally pulled out or harmed.

The certified guide system has also been established so that visitors can gain a greater understanding of the nature on Amami. Our guides have taken special training in subjects like geomorphology and history and culture, so you should be able to have fun safely getting to know its nature while walking with a guide.

The forest is home not only to wild birds and small animals, but also to poisonous habu snakes and insects. When trekking, be sure to wear long sleeves, long pants, and sneakers that are easy to walk in, and follow your guide’s instructions. There is a gate at the entrance to the walking path of the trekking route, and cars are prohibited from entering. The walking path is approximately 2 km. and takes 1½ to 2 hr. to trek. The path is nearly flat, so it is easy even for people new to trekking to walk.

Kijima: This walking path was originally the forest path islanders used to cut down forest trees. The trees were logged to use for day-to-day living on the island, so the places that can be called untouched primeval forest are limited. Even so, the reverence the people of Amami have for nature is the sole reason there is still a forest today thick with greenery like a primeval forest.

Mr. Kijima grew up on Amami Oshima and is full of knowledge about the history of the people who not only logged, but also protected and nurtured the forest. He spoke about the deeply rooted devotion to nature that the people of Amami have had since ancient times.

A paradise for living things protected by Kinsakubaru Forest

It is finally time to start trekking in Kinsakubaru. In the forest, the sunlight is interrupted by tall trees standing over 10 m. tall, such as chinquapin, evergreen oak, and Chinese guger trees, and it feels as if the temperature has slightly dropped.

A tree with massive leaves spreading out stands in a sunny spot. This is a Cyathea lepifera, also known as the brush pot tree, which is emblematic of Kinsakubaru Forest. This giant plant has also grown to as much as 10 m. and has retained the same appearance for around 100 million years. The forest, covered in huge trees, creates the illusion of having gone back to primeval times. Kijima: Kinsakubaru is covered in greenery from the ground to up over our heads with a mix of trees of varying sizes. It’s a forest that feels like a dome of greenery. Because of that, the forest’s humidity stays constant and valued plants and insects have been able to continue living.

The benefits of the trees do not stop with humidity. When you look down, you realize there are acorns and chinquapin nuts that have fallen on the ground. These are important foods for the forest’s animals. A comfortable temperature and humidity, and an abundance of foods support the forest’s ecosystem.

Kijima: When it comes to the animals of Amami Oshima, the Amami rabbit, an endemic species, is famous. But, most of the island mammals are nocturnal and are rarely spotted during the day. Instead, in the daytime you often encounter wild birds. In Kinsakubaru there are wild birds including endemic species such as the Amami jay and Ryukyu robin, as well as the Varied tit, Japanese tit, and Whistling green pigeon. You have a good chance of encountering these birds early in the morning if you enter the forest in small numbers to avoid startling them. 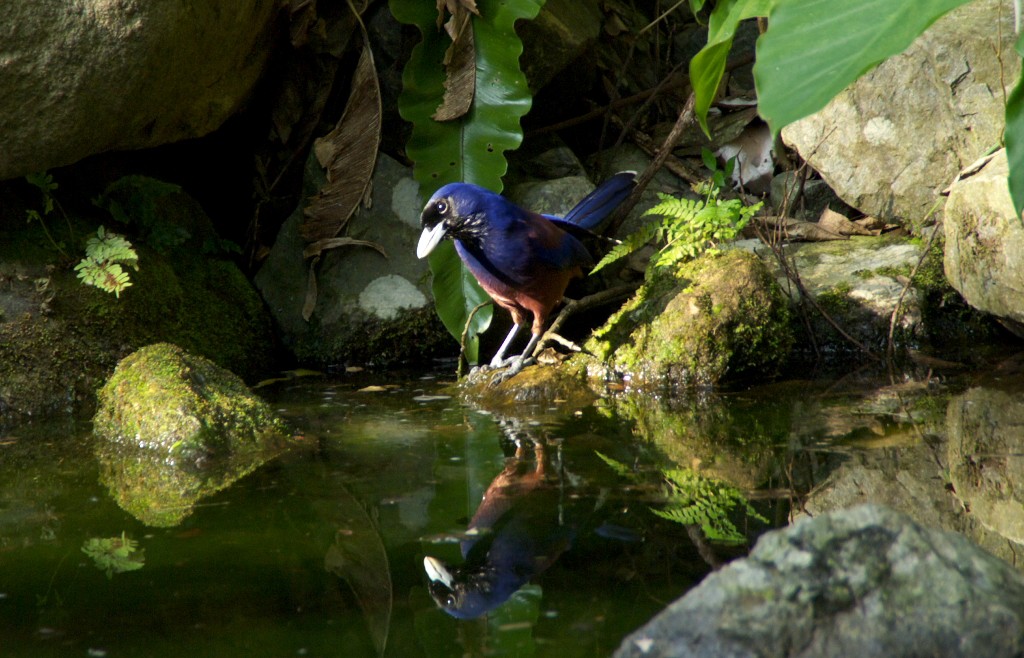 In the forest, if you listen carefully, you will hear the cries of wild birds coming from here and there. Look closely at the trees and you also might see creatures such as the rare Ryukyu tree lizard and Sword-tail newt. Which creature you will encounter is entirely up to fate, says Mr. Kijima.

Kijima: Even if you intend to see all the creatures you want to, you’re going up against nature, so it won’t go as you plan. Instead, I suggest you enjoy the forest by feeling the damp air unique to the forest and the sound of the wind. If you stop and close your eyes, you will feel signs of the wind that comes from deep in the forest and stirs the trees. The freshness of the breeze as it blows by with the fragrance of the flowers and greenery is extraordinary.

In the spot where you turn back on the walking path stands a Quercus miyagii (a species of oak) that has distinctive roots similar to planks that are called buttress roots. The huge tree, said to be over 150 years old, has an impressive appearance and seems to exude the energy of the Amami forest.

Kijima: Take a good look at the trunks and branches of the trees. There are orchids that grow on them and bloom with flowers. In May, the Greater swamp orchid and in June–July the Diploprora championii and Nagoran orchids bloom with adorable, small flowers. They bloom effortlessly, but are all endangered species on the Ministry of the Environment’s Red List. Kijima: Wild strawberries can be picked and put in a basket made by rolling up the leaves of the Japanese silver leaf and sewing them together with fern stalks. In modern times we’ve forgotten this kind of outdoor craft, but I bet that interacting with nature in this way creates great memories of your travels.

Naturally, the plants and animals in national parks such as Kinsakubaru Forest can’t be removed, but Mr. Kijima thoughtfully explains what plants are good to eat and where it is fun to pick them. If you want to enjoy the endemic species of the island, in addition to Kinsakubaru Forest we also recommend climbing Mt. Yuwan, the highest mountain on Amami Oshima. It stands at 694 m., and close to the mountaintop there is an observation tower that gives a sweeping view of the island and a shrine dedicated to the gods that are said to be founders of Amami Oshima. The path up to the mountaintop stretching a few hundred meters is a treasure trove of endemic species. There are several species of Japanese wild ginger that has heart-shaped leaves that are endemic to Amami and grow wild.

You can also go trekking to encounter endemic species in other parts of this World Natural Heritage area besides Amami Oshima. Go trekking on the island of Tokunoshima, located about a 30 min. plane ride from Amami Oshima, and you will be able to find Asarum leucosepalum and Calanthe tokunosimensis, which are plants unique to the island.

In addition, in Yanbaru Forest in the northern part of the Okinawa Main Island, there are endemic species including wild birds such as the Okinawa rail and Okinawa woodpecker, and the Ryukyu black-breasted leaf turtle. Here you will find an expanse of nature that differs from Kinsakubaru Forest.

Why not enjoy some leisurely trekking? Spend some time observing flowering plants and encountering nature. In spite of yourself, the experience will reawaken the childlike wonder in you.