Experience the distinctive cuisine of Ogasawara, born from its uncommon island environment

The Ogasawara Islands are located about a thousand kilometers south of central Tokyo. There is a unique culture here that is quite different from that of other parts of Japan, thanks to the slow pace of life and subtropical sunshine—and because it takes 24 hours to reach the area by ferry. The area has long been known as a tourist destination, drawing travelers looking to explore its unique natural environment, but Ogasawara’s unique produce, known as shima-yasai (“island vegetables”) and shima-furutsu (“island fruit”), has sparked renewed interest in its food culture in recent years.

We asked Tetsuya Nakamura, a chef and the owner of the Kutsurogi no Yado Tetsuya guesthouse in Chichi-jima, to tell us more about what makes the vegetables of Ogasawara so special. Nakamura: The shima-yasai vegetables grown on Ogasawara don’t really make it to markets in the rest of Japan, so people are increasingly visiting the islands in order to experience them.

What makes them so unique is their depth of flavor. It seems like the tomatoes you see in the supermarkets these days, for example, are almost all grown in hothouses and have a very mild flavor. But the shima-tomato we grow in Ogasawara have a rich, authentic tomato flavor thanks to being cultivated outdoors in our warm climate and intense sunshine. Tomatoes of all sizes are grown on the islands: large ones, medium-sized ones, and cherry tomatoes. The cherry tomatoes in particular have been getting popular recently because they’re so sweet—to the point that people all over Japan have started ordering them. Another popular Ogasawara crop is winged beans, which they call shikaku-mame, or “square beans.” Many of the local eateries serve them as well.

Nakamura: Winged beans began as a test crop on Ogasawara about 35 years ago, but they’ve since become known as one of our signature vegetables. They go great with oil, so they’re particularly delicious as tempura. The frying brings out their natural flavors while maintaining their delightful crispness. The Ogasawara Islands are actually not naturally suited to farming. Centuries of volcanic activity have made flat land scarce, and a shallow layer of topsoil quickly gives way to bedrock. People have only been able to cultivate the island through the painstaking process of land reclamation.

The locals rediscover the wonders of their own islands

The subtropical climate of the Ogasawara Islands means that they are able to cultivate numerous island fruits as well, among them mangos, lemons, papaya, and pineapple. One of the most famous shima-furutsu is passion fruit. Originally from South America, this subtropical fruit is known for its fresh aroma and sweet-tart flavor. Nakamura: Passion fruit has two growing seasons, one between April and July and the other starting in the fall. The fall harvest has a lower sugar content due to having fewer hours of sunshine, so it’s typically used in processed goods like juices, jams, and liqueurs.

Subtropical fruits do very well here thanks to our warm climate—they basically just grow on their own. Even in my yard we can grow things like bananas and papayas. Of course, they’re no match for what the professional growers produce (lol).

The produce grown on Ogasawara are sold at farmers’ markets and other outlets across the islands. Only about 2,600 or so people live in village of Ogasawara itself, so everyone who has lived here long enough knows who specializes in growing which fruits and vegetables. One of the best things about visiting the islands is getting a chance to experience how differently the produce grown using their particular methods tastes. Nakamura: I’ve lived on Ogasawara for over twenty years, and I feel like the relationship people have to the native crops has changed significantly in that time. Twenty years ago, the people here looked forward to eating the food that was sent over by ship from the mainland. They hadn’t realized the culinary riches that were available to them right here on the islands—or how attractive they would be to others.

Today, the locals not only value the shima-yasai and shima-furutsu as a precious part of their food culture, but see them as a source of pride in the outside world as well. I think it’s wonderful that people come visit just to enjoy the distinctive fruits and vegetables that the islands have to offer.

More than 140 years of history ends in successful coffee cultivation

No story of Ogasawara produce is complete without mentioning the coffee. In fact, Japanese coffee cultivation began on the Ogasawara islands, and Ogasawara coffee is widely known as the brand of choice for many coffee bean connoisseurs.

Coffee bean cultivation originally began on Ogasawara some 140 years ago. It started as a government-led test project, though unfortunately the habit of drinking coffee did not take hold with the Japanese back then.

It was about twenty years ago that coffee-growing was revived on the islands. We spoke with Motomi Nose, fifth-generation owner of Nose (pronounced no-say) FarmGarden. The farm has been in business for over a century on Chichi-jima, and Motomi, like her father Akio, was one of the people who worked hard to revive coffee cultivation on the island. Nose: Coffee cultivation was never big in Japan, and the fact that we started without any expertise or precedent was challenging. We had to look all over the country just to find a machine we could use to thrash the beans.

When we started, we had no idea whether we’d actually be able to grow the beans—much less make them economically viable. But we just kept finding our way forward in the dark until a few years ago when we eventually found a way to reliably ship out our product.

But growing coffee here still takes a massive amount of work. It takes five years to yield the first crop after planning the seeds, and even if each bean is painstakingly harvested one by one, it still takes about 30 minutes to collect a single kilogram. That amount then drops to around 100 grams once the seeds (the portion used to make coffee) are extracted. 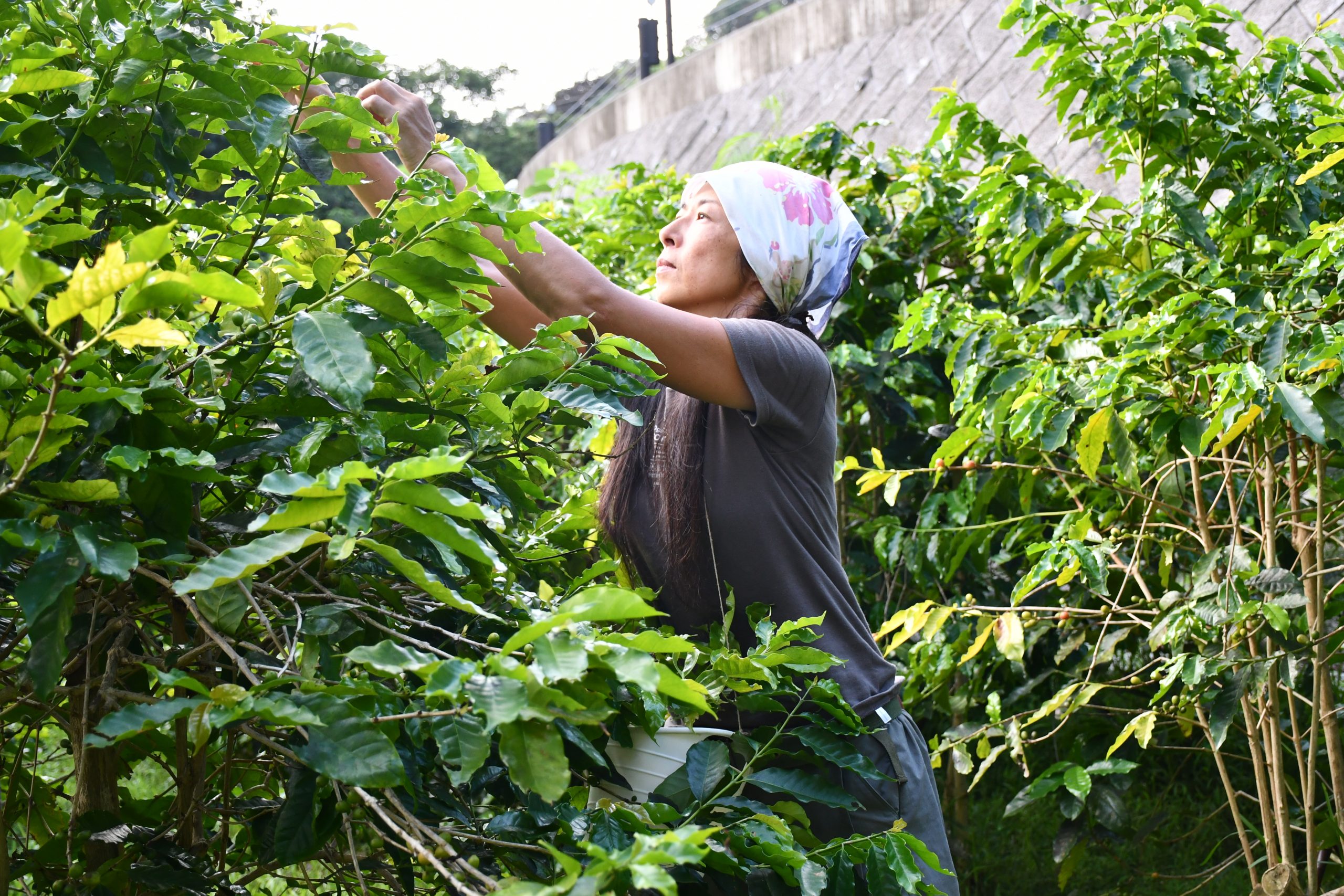 The scant amount of Ogasawara coffee beans harvested through all that effort are immediately sold to island cafés and as souvenirs. Opportunities to drink the local coffee off the islands are extremely rare.

Nose: We ship out about 200 kilograms of coffee beans a year from Nose Farm. Each bag of coffee has about 10–15 grams of beans, so it only comes to about 20,000 cups of coffee. When I take people on guided tours of the coffee farms here, they are often shocked and amazed at just how much effort goes into the coffee beans grown in the Ogasawara islands.

Actually, Nose decided to live on the island because she was so impressed with the coffee here. Even though her family home had been in Ogasawara long ago, they moved to central Tokyo after World War II when the islands were occupied by the United States. So she actually grew up in the bustling capital.

Nose: The Ogasawara Islands were returned to Japan in 1968, right around the time I was born, and my father returned to the village. I stayed on in the city and eventually went to work for a company—but I ultimately returned here to Ogasawara.

I never intended to live here permanently, but I loved how the coffee beans grew here and had fun establishing my own cultivation methods. Before I knew it my whole life was here. The Ogasawara Islands are known for their abundant and varied produce—among them distinctive local fruits, vegetables, and coffee beans. Looking back on the local history, it’s clear that reclaiming their independence from the US and becoming listed as a World Heritage Site have been important turning points in giving the people of the islands fresh motivation and revitalizing their local culture.

In their uncommon natural environment, the people of Ogasawara cultivate rare produce that is hard to find in other parts of Japan. The sunshine that drenches this World Heritage Site makes the crops grow strong and healthy, lending its many gifts to the people of the islands.