Delight in the local cuisine of the Shirakami-Sanchi snow country

One of the largest remaining virgin beech forests in the world, Shirakami-Sanchi is home to a range of mountains upwards of a thousand feet in elevation. The cold winds blow in from the Japan Sea during winter, blanketing the mountains in snow that can accumulate to three or four meters in depth. The people who live in this harsh natural environment have developed a unique local food culture to help them survive the long winters.

One of its signature features is preserved foods. Pickled plums and other Japanese-style pickles can still be found all over Japan. But in the Tsugaru area of Aomori Prefecture, located in the northernmost region of Shirakami-Sanchi, a special kind of pickled plum called umezuke is an integral part of the local cuisine. Umeboshi are the classic type of pickled plum in Japan. They are bright red in color and extremely sour, have become a favorite traditional rice topping among Japanese everywhere.

Umeboshi plums are typically made by packing the fruit whole in salt for a week, and then pickling it in red shiso leaves (an herb in the mint family) for about two weeks. But the umezuke plums eaten in Tsugaru are made by aging the fruit for a year or two after preserving it in salt and then removing the pits. The meat of the fruit is wrapped in red shiso leaves and left to rest for another several months. Because they’re aged for so long, umezuke take on the bright red color of the shiso leaves and have a distinctively rich aroma and flavor. Yoko Ishita, whose family owns a shop called Kaneshime Ishita that has been making and selling shiso-wrapped umezuke for over a century, it is an extremely painstaking process.

Ishita: When we make shiso-wrapped umezuke plums, we start by removing the pits from each fruit individually and then wrapping the remaining fruit in the shiso leaves by hand. It’s incredibly painstaking work, but we do it the same way it’s always been done because we feel we should preserve the methods handed down to us from previous generations. So why this difficult preparation method came about in the first place? It’s actually one of the great accomplishments of the local women of Shirakami-Sanchi.

There’s so much snowfall in Tsugaru that it can pile up to the top of the first story in winter. These days, snow removal allows cars to travel on the roads, but back then, people remained shuttered indoors for the winter months.

The women of Tsugaru developed this process making shiso-wrapped umezuke to keep their hands busy during the long winters when they were stuck indoors.

Ishita: This process of carefully removing the pits from each plum individually and then wrapping the meat in red shiso leaves is a testament to the perseverance of the women who lived in the Tsugaru area. The practice is dying out today, but making shiso-wrapped umezuke was common practice in many households up until a few decades ago. 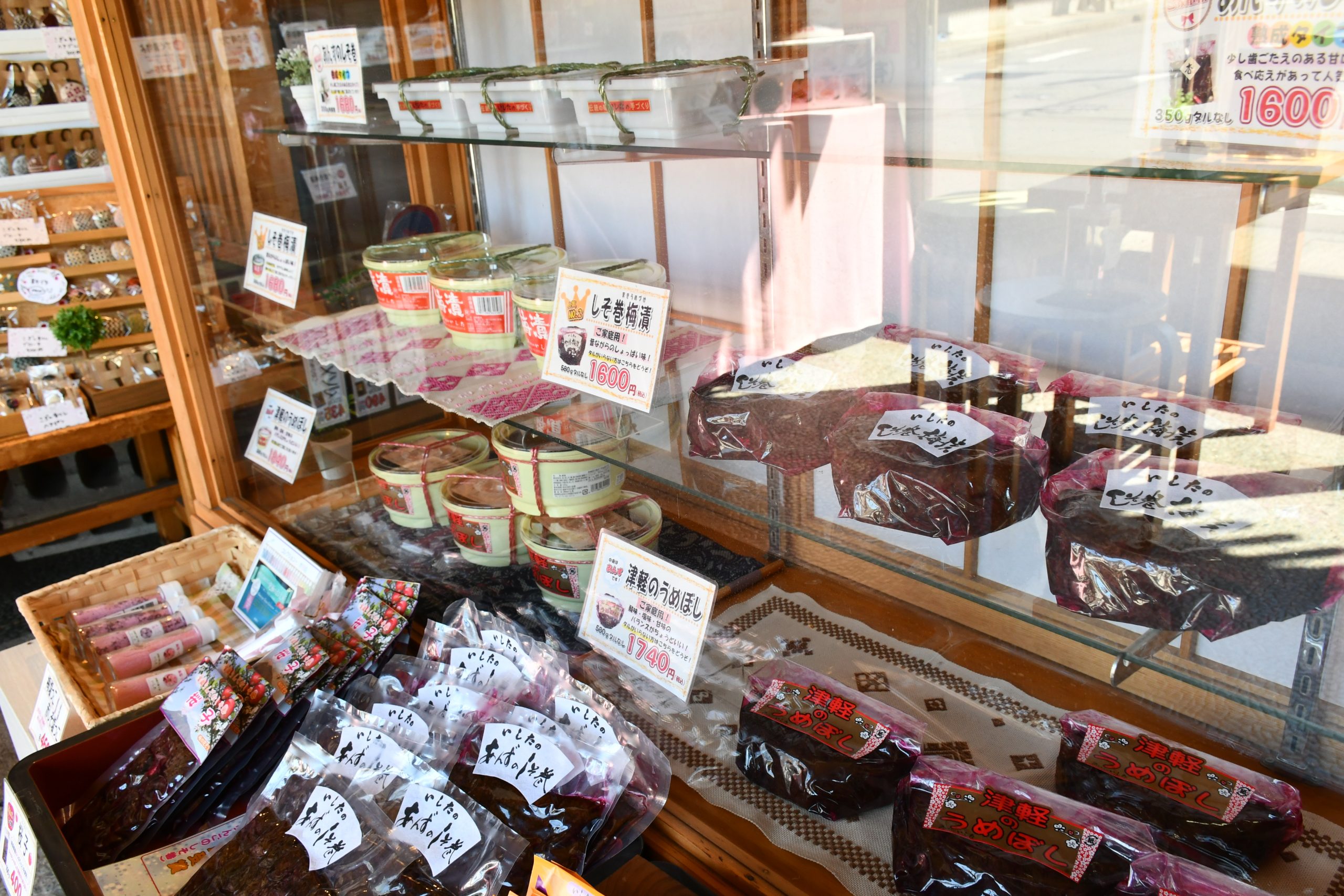 With more people becoming health-conscious in recent years, pickled plums with a lower salt content (8–10%) have become increasingly popular. But the shiso-wrapped umezuke plums at Kaneshime Ishita still have the same salt concentration they’ve always had (14.1%).

Ishita: We thought about going with the times and making shiso-wrapped umezuke with reduced salt, but our longstanding customers told us that they didn’t want us to change the way they’ve always tasted—so we ended up keeping them the same.

We use the same flavorings we’ve always used, preparing them with sea salt and never using additives or preservatives. People who come to Japan and try pickled plums for the first time are typically surprised at how salty they are, but if they try eating them cut into small pieces with bites of rice, they’ll realize how wonderfully the flavors go together. Umezuke plums hand-wrapped in shiso leaves by the local women taste the same as they always have, imbuing their intense flavor with a kind of nostalgia. They’re also rich in citric acid, which helps the body recover after hard work and makes them the perfect accompaniment to rice after a long hike through the Shirakami-Sanchi mountains.

There’s another traditional dish created by the northern women of Tsugaru called kenojiru. It’s a type of miso soup packed with stewed ingredients—daikon radish, carrots, and burdock root grown in the flat areas of Shirakami-Sanchi and the Tsugaru Plains, edible mountain plants like zenmai and warabi ferns, freeze-dried tofu, and more.

The women in this area typically work hard in their family fields all year, so they have a tradition of going back to their childhood homes on January 15 of each year to rest for the Koshogatsu holiday. When they get there, the women make a huge pot of kenojiru soup for the family members still at home to eat while they take it easy. Yusuke Sasaki is the head chef at Tsugaru Umaiya, a restaurant that serves traditional Tsugaru food. He grew up here, and has been eating kenojiru since he was a boy.

Sasaki: My grandparents lived with us when I was growing up, so kenojiru was a regular part of our homecooked meals from the time I was little. In addition to kenojiru, we ate a lot of shark-based dishes, which are another traditional food in the Tsugaru area.

I’m 26 now, and some people my age have never had kenojiru or shark. It made me so sad to think of our local food traditions being lost. Local cuisine showcases the climate, history, and culture of a place. Like shiso-wrapped umezuke plums, kenojiru soup tends to be rather salty, but Sasaki says there’s a reason for this.

Sasaki: The people of Tsugaru use salt to preserve their food so it doesn’t spoil during the long winters. That’s why northern food tends to be saltier. Salty dishes are part of our local history.

For local farming families, rice dumpling hotpot is a treat for special occasions

Now we turn to Akita Prefecture, which is in the southern part of Shirakami-Sanchi. Known as one of the best rice-growing regions in Japan, the area is famous for a dish called damako-nabe, or “rice dumpling hotpot”. Damako is a rice dumpling made of mashed rice. Akita Prefecture is famous for a local dish called tampo, which is made by wrapping mashed rice around a cedar skewer and grilling it, but damako dumplings are made without the skewers—just ball the mashed rice up—so they’re easy to make at home.

Shigeo Narita is the 78-year-old proprietor of Sakedoko Berabo, a Japanese-style pub located at the foot of Shirakami-Sanchi in Noshiro, Akita Prefecture. His family has been farming locally for generations. Narita: I grew up before the widespread use of mechanical farm equipment, so the local people would all go out to plant and harvest the rice together. Once all the work was done, we’d often celebrate together, and Damako-nabe was often served at the gatherings.

We’d use the rice we harvested from our own farms, plus Japanese parsley and mushrooms that we collected from the mountains. The green onions were local, too. Almost everyone who had a family farm back then raised chickens, so when we added the fatty chicken meat to the hotpot, it created an especially delicious broth. Along with rice, edible mountain plants are an important crop and an essential part of local Akita cuisine. They are of exceptional quality in this area, particularly in the pristine natural environment of Shirakami-Sanchi. Akiko Muraoka runs a restaurant and guest house in the town of Fujisato, located at the foot of Shirakami-Sanchi. She goes into the mountains herself to pick mushrooms, warabi and zenmai ferns, and other wild plants to serve to her guests. Muraoka: One of the most popular mushrooms around here is one we call sawa-modashi. A more common name for it is naratake, or “honey fungus” in English. It has a distinctive crunchy texture that’s also delicious stewed or in miso soup.

When it comes to wild edible plants, there are warabi ferns that we pick from spring to early summer, and a kind of bamboo shoot we call nemagari bamboo is also popular. Traditionally, people would simmer nemagari bamboo with horsemeat on special occasions.

There are so many different kinds of edible wild plants in Shirakami, and they all grow really well here. You can probably tell just by looking at them that they’ve been nurtured by the rich mountain soil here. Because environment in Shirakami-Sanchi is so harsh, people have left it undeveloped. And because the mountains have remained in their natural state, they continue to provide its bounty to the local people. Muraoka believes that the pristine water of Shirakami is one of the most important gifts nature has to offer.

Muraoka: The water that comes from the forests of Shirakami nourishes the many edible plants in the mountains while supporting river fish like iwana char, yamame salmon, and ayu sweetfish that can only live in crystal-clear water.

I used to live in the city, but I came back to Fujisato (a town that makes up about a fourth of the Shirakami-Sanchi area) thirty years ago to raise my kids. We go into the mountains to pick edible plants and to the river to catch fish. Being able to live a healthy life surrounded by all of this beautiful nature makes you appreciate how wonderful it is.

Picking wild plants in the mountains can be dangerous, however, if you don’t have the specialized knowledge you need. It’s not as easy as it sounds, and there are fewer people these days that can do it. I want to help prevent the loss of this precious knowledge and preserve our local food culture.

The local cuisine of Shirakami has developed out of its harsh climate and an abundance of delicious ingredients. These priceless traditions are gradually fading, however, due to an increasingly severe depopulation crisis in the area. One truly hopes that the area is able to preserve not only its impressive natural beauty, but also the unique food culture that has been created by the people that live here.