Flying fish are a favorite of the Yakushima islanders

Archeological surveys estimate that people have been living on Yakushima Island for some 7,000 years. Around 13,000 call the island home today, most of them concentrated in the coastal areas. The waters around Yakushima are bathed in a warm-water ocean current called the Kuroshio that comes up from the equatorial regions. The abundant sea life that the Kuroshio brings with it has supported the lives of the people here for generations.

Hideyoshi Kisaku is a Yakushima fisherman that specializes in catching flying fish. This unique species is able to jump out of the water and glide along the ocean surface for more than 100 meters. Yakushima is one of the stops along the way as the Kuroshio current takes them on a migration path from Taiwan to Hokkaido, and the island’s fishing ports are known for bringing in more flying fish than any in Japan. 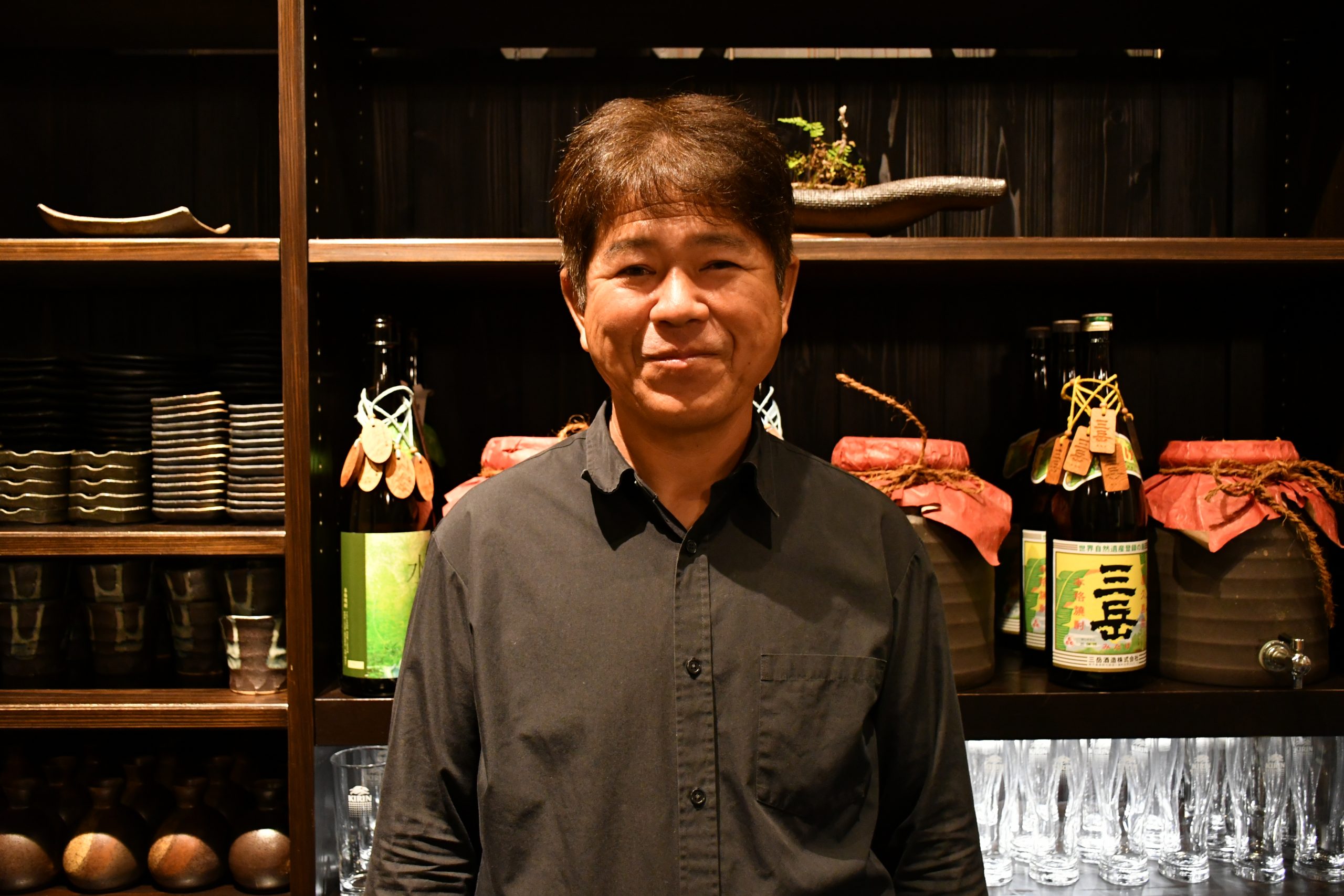 Kisaku: Flying fish have always been abundant around Yakushima, and they’re one of the most recognizable foods on the island. They’re delicious fried or salt-grilled, but nowhere else are you able to eat them raw. Some of the best ways to enjoy them at peak freshness are as plain sashimi, dressed with a vinegared miso sauce, or as bo-zushi, a kind of long, pressed sushi. Flying fish have a distinctively light, mild flavor, so you can eat them every day and never get tired of them. In addition to fishing, Kisaku runs an izakaya pub called Anei Maru where he serves up fresh-caught flying fish sashimi.

Kisaku: We get about ten different kinds of flying fish come through Yakushima each season. Catching flying fish is pretty rare in other parts of Japan, but a lot of Yakushima fishermen specialize in it using a unique method called the “seine rope” method. We use a net and a rope that are together about 1,500 meters long and corral the flying fish into them using two boats. Four or five fishermen work in a unified team to catch them.

Only seafood caught and served locally is this fresh and delicious

Another critical fish to the Yakushima people’s diet is the kibinago, or the silver-stripe round herring—a small fish less than 10 centimeters in length. Subtly sweet on the palate, they’re cooked all kinds of different ways, including tempura-fried, batter-fried, and semi-dried. Like flying fish, kibinago can be enjoyed as sashimi only on Yakushima Island. It’s a fish that spoils easily, so it’s rare to find it served raw. But because Yakushima is surrounded by abundant ocean waters, it’s possible to enjoy this rare delicacy here.

We spoke with Tsutomu Watanabe, proprietor of the Iso no Kaori sushi shop on Yakushima Island, about what makes Yakushima seafood so special.

Watanabe: I’ve traveled all over Japan studying the fishing ports in different areas, but the seafood on Yakushima is truly special. It’s not just that the waters around here are so rich in nutrients and teeming with life—it’s also because what we catch gets to the table in an amazingly short amount of time.

Kibinago in particular lose their freshness almost immediately since they’re so small. That’s why they have a slightly bitter taste if you eat them in other areas. Being able to enjoy the inherent sweetness of the fish when it’s served as fresh sashimi is an experience that’s unique to Yakushima Island. What is this blue mackerel that has to be eaten within twelve hours of being pulled from the sea?

Another fresh fish that’s unique to Yakushima and well-known among connoisseurs is a blue mackerel that the locals call kubiore-saba.

Mackerel is a widely popular fish eaten across Japan. It also loses freshness quickly, so it’s rare to find it served as sashimi. Kubiore-saba, which literally means “broken-neck mackerel,” is a strategy devised by Yakushima fishermen so that it can be eaten raw at peak freshness. 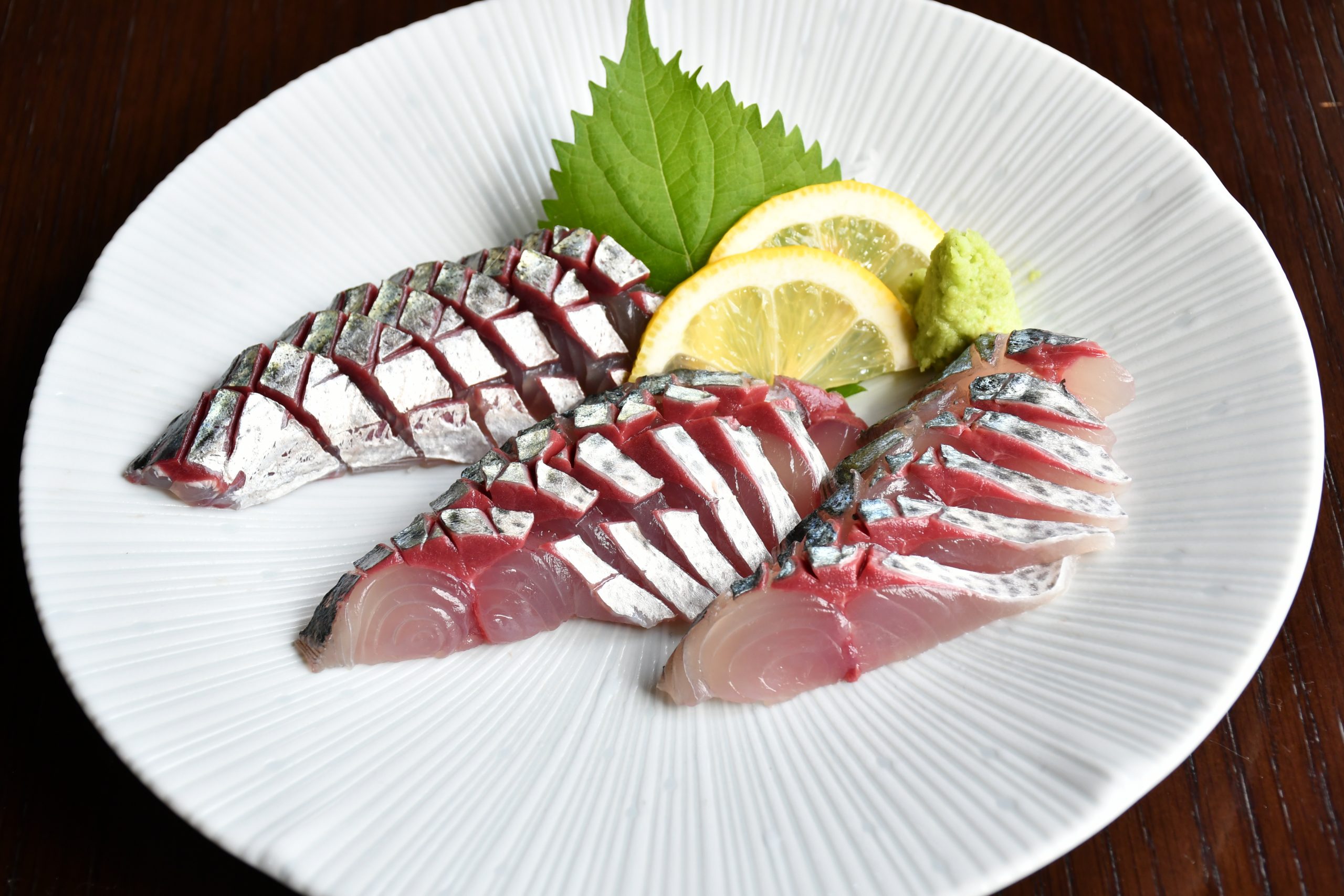 Watanabe: The fishermen of Yakushima break the necks of the mackerel when they land them, draining the blood and packing them in saltwater. This maintains them at peak freshness and keeps them from spoiling.

The difference in freshness with kubiore-saba is plain to see. The body stays bright and shiny. Our customers are amazed just by the way they look. I serve mackerel both as sashimi and nigiri sushi at my shop in order to make the most of this freshness—preparations that you won’t find anywhere but Yakushima.

When you bite into a dense piece of mackerel sashimi here, you get to experience both its delightful firmness and the rich, clean-tasting fish oils spreading across your palate. You just have to be really careful that you eat it while it’s still fresh. Even kubiore-saba only maintains its delicious flavor for a half a day or so. After that, it just tastes like the regular mackerel you can get anywhere else.

Blessings from a forest lovingly protected by their ancestors

Tsutomu Watanabe grew up in a fishing family. He told us how deeply he feels a connection to the seas and forests of the island when he looks out on the water as he fishes. Especially after a big rainstorm.

Watanabe: Most of Yakushima Island is covered in forests and mountains of 1,000 meters or more. The water brought by rainfall flows over the island before eventually emptying out into the sea. Right after a big rainstorm, the ocean is clouded by greenish mud, and you can actually see the nutrients from the forest being dissolved into the sea.

Once the cloudiness settles, the fish start biting like crazy. The ancient people would never cut down the Yakushima cedar trees that grow deep in the mountains of the islands because they considered them to be sacred dwellings of the gods. It’s because our ancestors protected those forests that we are still able to make a living as fishermen today. Generations of Yakushima islanders have had a deep reverence for its forests since ancient times, simply because they know that their survival directly depends on protecting them. Watanabe taught us that their wisdom lives on in the local people even today.

Back to Yakushima Page