To the solitary island of Hahajima where many endemic species remain On Hahajima island, located nearly at its center is Mt. Chibusayama (463m), the highest peak of the Ogasawara Islands. It is an adventure spot where you can enjoy the great nature of Ogasawara and its unique ecosystem through trekking.

In the damp mountain forests along the trail, you can see various endemic species such as Hahajima-no-botan (Melastoma pentapetalum) (July to August), Dendrocacalia crepidifolia  (October to December), and other plants, while its fauna include the Bonin white-eye and the Boninosuccinea ogasawarae, a land snail endemic to Hahajima Island, and other species. In order to prevent invasion by alien species, clean and disinfect clothing and shoe soles at the trailhead

The Mt. Chibusayama Trekking Tour is 6km round-trip and takes about 4 hours to complete. A promenade is also in place, making it a popular climbing route for beginners and individuals alike.

There is only one mountain trail in a large loop. About a 5-minute walk from hamlet of Motochi, where the shops and inns are located, you can climb either the (as of August 2019, the route from Gezanguchi is partially closed). 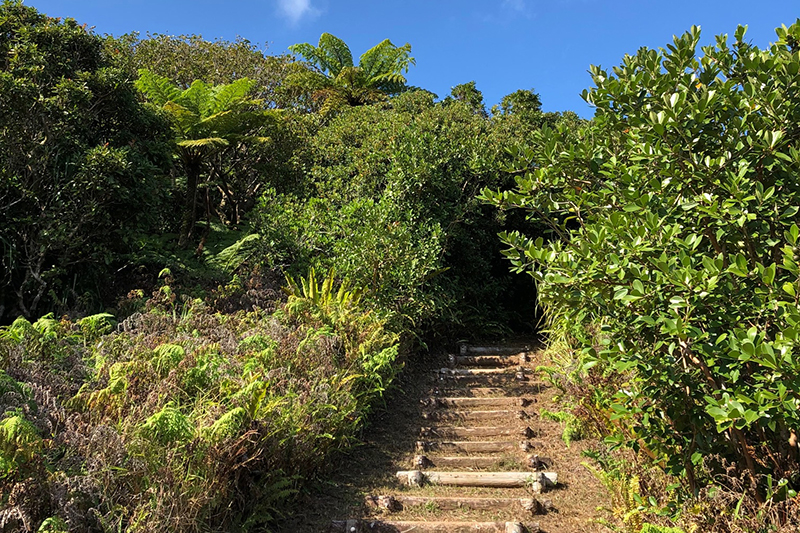 Although the mountain trail is in place, there are points where winding tropical vegetation protrudes, as well as steep stairs, iron ladders, and slippery points. We recommend well broken-in trekking shoes.

There are no toilets or vending machines on the trail, so make sure you have basic climbing equipment, such as mountaineering wear, backpack, rain gear, drinking water, and portable toilets.

When you arrive at the starting point, be sure to wash the soles of your shoe soles and your clothes to prevent the invasion of alien species and protect the natural environment unique to the island. Deposit any small seeds and insects found on the sole of your shoes on a mat and disinfect it with acetic acid spray. Use a cleaner to remove clothing deposits. Of course, don’t gather any plants or feed animals while on the trail, and be sure to pack out your trash with you. The cleaning is now finished. Next we aim for the top of Mt. Chibusayama on a mountain trail that has an abundant distribution of plants, such as Ogasawarabiro palms and Terihaboku trees. It is important not to leave the mountain trail because walking on the side of the mountain trail or off-trail may damage the rare species found here.

The first half of the route is a steep climb. You may lose your energy, but you will only hear the songs of birds and the wind. The tropical plants cover your head and shield you from the sun, so you can feel cool. Along the route, in addition to the orchids (Goodyera boninensis) that grow naturally in the Ogasawara Islands, you can also see many species of endemic plants such as the Takonoki and Tsurudako. There is also signs with descriptions of the plant, so you can enjoy trekking while learning firsthand about the specific species. Goodyera boninensis, a type of orchid

There are many species of endemic snails, notably the Ogasawara Okakamono Aragai ((Boninosuccinea ogasawarae). Most of them live in areas higher than 350m above sea level.

Finding a small snail isn’t easy, but their shedded shells can be seen relatively often. Be careful not to step on them on a rainy day as they may appear on the stairs of the mountain trail. Collaboration between Battle Sites and Nature in the Southern Country

At one point next to the mountain trail there is a huge hole with a diameter of about 20m and a depth of about 4m. This was an explosion from a 500kg bomb that was dropped during World War II. In addition, it is possible to see the scars of war, such as the remains of batteries and trenches, now covered with tropical plants. Around the hole, a fern plant called Maruhachi can be found. An endemic species of the Ogasawara Islands, it is named because the pattern found on the stem looks like a “circle” with the Japanese character for “eight” inside it. Some of them are over 10m in height, and their dignified appearance is just like a giant work of art in the forest. Climbing ahead further, you can see the banyan trees that fill the whole area. The bent and undulating banyan trunks and roots create a “natural tunnel.” Proceed through it carefully and move forward. The stairs on the mountain trail are often covered in moss and are slippery. There are also points that cross the scaffolding that are attached to the steep slope here. It’s quite a thrill to walk right next to a steep cliff. Let’s go slowly though, without getting impatient.

Continue climbing for about 2 hours, all the while having contact with nature and its creatures, and the view suddenly opens as you reach the summit of Mt. Chibusayama. There is only a small viewing platform on the top of the mountain, but there is a reward in the form of a
“360 ° superb view.” To the north, along with the limestone karst plateau that is unique to the Ogasawara Islands, you can clearly see Chichijima in fine weather. To the east, a long and narrow Higashizaki peninsula protrudes into the sea, stretching out, and there you can see a spectacular view of the clear sea. 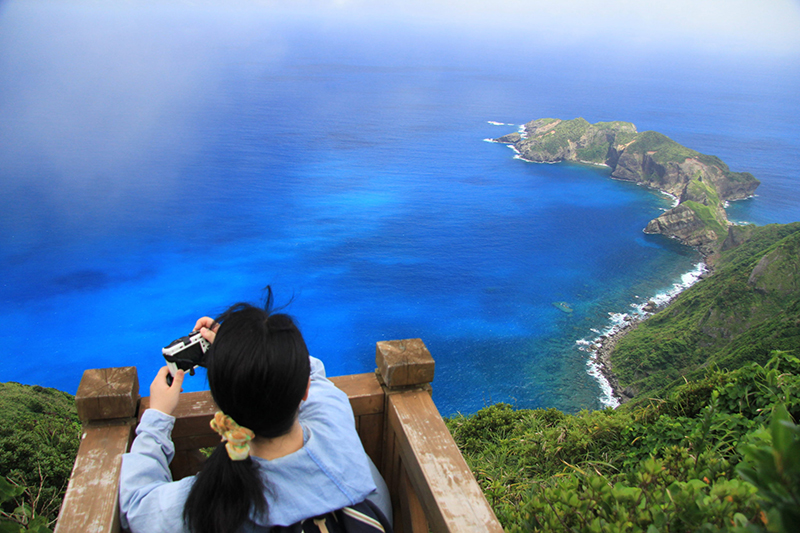 On the south side, you can see the Motochi hamlet with the trailhead and the Oki port. You can see the islands of Meijima, Imotojima, and Anejima in the distance. If you look closely at the sea surface from winter to spring, you may be able to find a family of humpback whales. 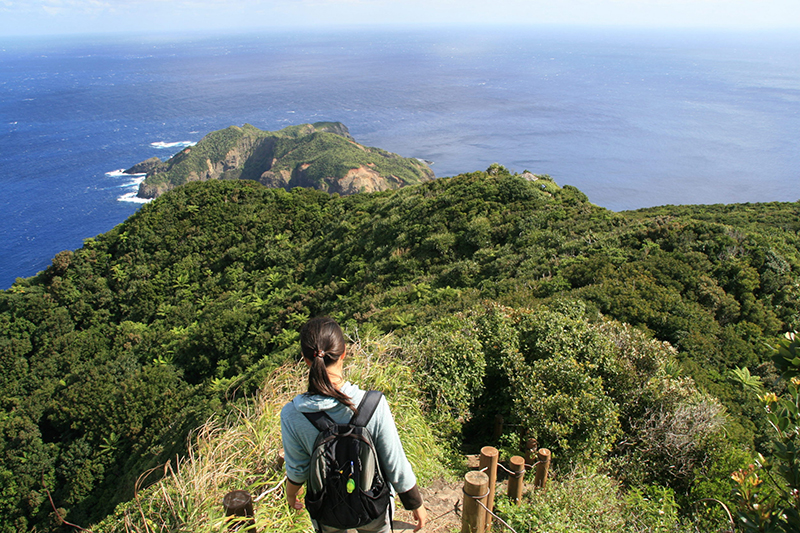 The marker at the summit features a signature relief. Using the crayon from a kit purchased at the tourism association, you can do a rubbing on paper, and when you bring it back to the tourist association, they will issue you a certification that you reached the summit. 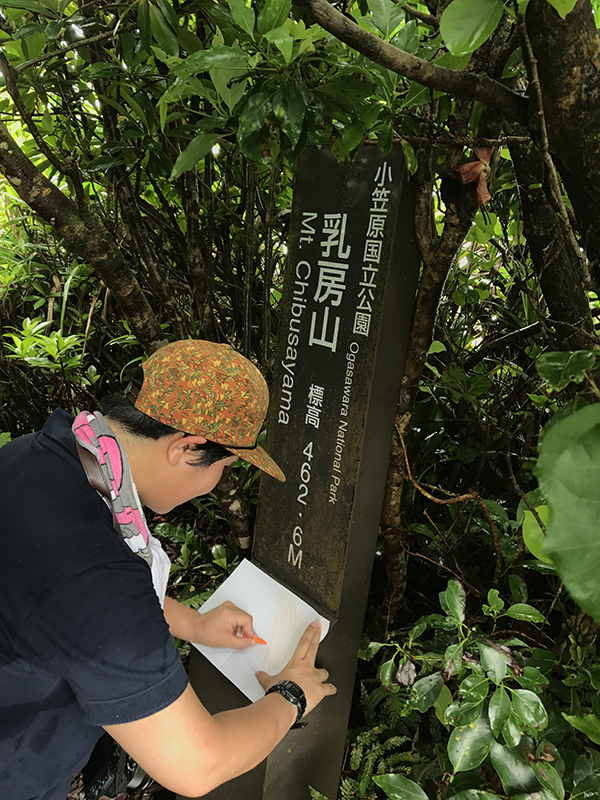 Is it possible to meet a Bonin white-eye at a watering spot for birds?

After enjoying the panoramic view, your descent down the mountain begins. Instead of going back the way you came, go straight along the trail and head for Gezanguchi.

There are several watering spots on the mountain trail that are used by wild birds. There are plastic bottles available here that store rainwater, so please use these to pour water into the basin. The Bonin white-eye and the Japanese wood pigeon (Columba janthina nitens), which in the whole world live only on Hahajima Island, may come along to take a bath. If a small, yellow-spotted Bonin white-eye appears out of nowhere, set your camera quietly. You should be able to get a valuable photo that can only be taken here.

At last, when you descend on a gentle downhill to the Gezanguchi trailhead in the original village, the Mt. Chibusayama tour has come to an end.

When you go on a tour with a nature guide who deeply knows the forest of Hahajima Island, you will also have a greater likelihood of encountering the endemic species. You will also be able to enjoy interesting stories about that wonderful ecology amongst other things.

Traveling around the Ogasawara Islands requires a minimum of 6 days and 5 nights due to travel by sea, so there are many people who enjoy the activities at a leisurely pace. Don’t miss getting that superb 360 ° panoramic view from the summit of Mt. Chibusayama while enjoying seeing the unique species of the Ogasawara Islands.