Ogasawara Islands: Home to unique plants and animals found only on this archipelago

To travel from central Tokyo, we take a boat heading south in the Pacific Ocean. After 21-some hours, the archipelago known as the Ogasawara Islands come into view, floating on the deep blue ocean.

The Ogasawara Islands are over 30 islands that are technically located in Tokyo. However, the sandy beaches gleaming white in the summer sun and the blue ocean inhabited by coral reefs make up a landscape of decidedly southern islands far removed from the cityscape of Tokyo and its tall buildings. The formation of the Ogasawara Islands reaches as far back as 48 million years ago. They have never been connected to a continent since being created by volcanic activity triggered by the sinking of the Pacific Plate.

This means an abundance of untouched nature still remains on these islands. Approximately 40% of the plants and over 90% of the snails on the Ogasawara Islands are endemic species found only here. In recognition of this rare natural environment, the islands were registered as a World Natural Heritage in 2011.

Chichijima (Father Island) and Hahajima (Mother Island) are the only Ogasawara Islands inhabited by ordinary residents. Even on Chichijima which has the largest population of around 2,000, the only area that can be called a town is the vicinity of Futami Port where boats dock. The majority of the island is covered in mountainous terrain and forest. In its long history, humans and plants and animals have lived side-by-side, respecting one another’s existence.

There is a nature sanctuary for endemic species on the island that can’t be entered without a guide, but endemic species can also be found outside of the sanctuary. For example, in the residential area visitors can encounter the endemic species, the Japanese wood pigeon, which is locally nicknamed the “akapoppo.” In summer, endemic species of flowers begin blooming one after another, such as the Schima mertensiana that has a beautiful contrast of white petals and yellow stamens (May–June) and the Melastoma tetramerum that has four white petals and a diameter of around three centimeters (July–August).

Some of the endemic species, including the Melastoma tetramerum, are being safeguarded as endangered species, and extreme care must be taken when viewing them.

From July to September, visitors to the Ogasawara Islands can help release just-hatched green sea turtles into the ocean.

Not only are green sea turtles native to the Ogasawara Islands, but the islands are also well known for being the largest breeding ground in Japan. In the past few years, every year between May and August around 300–500 female green sea turtles arrive to lay eggs.

The long history on the Ogasawara Islands between residents and green sea turtles dates back to around 1830 when people first began living on Chichijima. Since that time, sea turtles have been fished as food and at one time their numbers dwindled because of overfishing.

“Today, while observing the fishing limit of 135 turtles a year, we’re steadily increasing the percentage of sea turtles that hatch naturally,” says Chiyo Kitayama from Everlasting Nature of Asia, a certified NPO that conducts preservation activities for sea turtles primarily in Asia.

Kitayama: Sea turtles have been designated as endangered species. There are only seven species in the world, and the green sea turtle is one of them.

We run the Ogasawara Marine Center on Chichijima while surveying the eggs laid by the green sea turtles along approximately 40 beaches on the three islands of Chichijima, Hahajima, and Mukojima. Ogasawara Marine Center conducts various conservation activities, such as counting the number of eggs laid and tagging mother turtles to aid the surveys. However, their operating principle is to leave nature to nature.

Kitayama says that even the harm from the beach crabs and ants eating the eggs should be viewed as natural. It’s part of the island’s prevailing ecosystem. Kitayama: As an exception, we only dig up nests on Omura Beach, which is the closest to the residential area around Futami Port. We keep them at Ogasawara Marine Center until the eggs hatch.

We do that because the baby turtles that hatch on that beach would move away from the ocean because they’re affected by lights from homes and streets. Because of that, some hatchlings got hit by cars and some dried out and died. During the egg-laying season, we have a nighttime patrol making the rounds until around two in the morning. We also conduct egg-laying surveys and give advice to tourists on how to observe the egg laying.

By the way, the sex of sea turtles is determined by the temperature experienced during incubation. To protect the natural sex ratio, we dig up nests after the sex has been determined. The eggs protected at Omura Beach are taken inside the Marine Center. After hatching, the baby turtles are released as soon as possible. This activity is carried out for tourists as the Sea Turtle Release Experience.

The nighttime release of baby turtles is carried out alternately at Miyanohama Beach on the northern part of Chichijima and Kopepe Beach on the southwestern part. They’re released at two locations so that sharks and other predators won’t take notice. Persons wanting to participate should inquire at the Marine Center since the decision whether to hold the activity is made on the day. Participants gather at the designated beach of their own accord.

True to Kitayama’s comment that people gain a different impression of the beach at night than during than day when it’s crowded, Chichijima is very quiet after the sun sets when we’re just a little distance from the town. Staff are waiting for us at the beach parking lot where participants first gather. They have a box of baby turtles that have just hatched. The hatchlings have several characteristics that full-grown turtles don’t. One of them is a small mark on their stomachs similar to a belly button where they were connected to an egg yolk. The sharp point on the tip of their nose, called a caruncle, is also unique to the hatchlings. They use it to break open the egg shell when hatching. Kitayama: Sea turtles are born with a sac of nutrients called the yolk attached to their stomachs. The baby turtles use these nutrients to dig out of the nest and head for the ocean.

It takes about two weeks for the yolk to be absorbed by the body. Within that time, it takes between three and seven days to dig out of the nest. In the remaining days they must reach an area with an abundance of plankton, called a current rip, or die of starvation. So, when the baby turtles leave the eggs we’ve been protecting, we immediately return them to the beach and release them in the ocean. The first thing the staff does at the gathering to release the hatchlings is to use a picture-card show to tell us about sea turtles. English is also available.

Kitayama: We also make time while we’re in the parking lot to let participants touch the sea turtles and take pictures. Once we’re on the beach, lights from cell phones and flashlights have to be turned off.

The baby turtles, energetically waving their limbs around, are carried to the beach when the lecture and picture-taking in the parking lot are finished. It’s so dark we can’t even see our feet since there are no artificial lights on the beach, but on a clear day a sky full of twinkling stars is visible. The breathtakingly beautiful Milky Way is especially easy to see from Kopepe Beach.

Kitayama: Sea turtles heading toward the ocean rely on the light of the stars and moon. If you ever see baby turtles on the beach at night, you should never shine a light or take a picture with a flash.

The baby turtles move away from us and make a mad dash for the water’s edge as if they’ve known their destination all along. Participants should listen for the faint sounds the baby turtles make as they urgently push their way through the sand. You may encounter a mother turtle on the beach that is laying eggs. If so, watch quietly from a distance without turning on any lights.

How you can protect green sea turtles

Green sea turtles are found here and there on the island beaches in summer, but the residents of the Ogasawara Islands don’t make a point of going to watch them lay eggs. 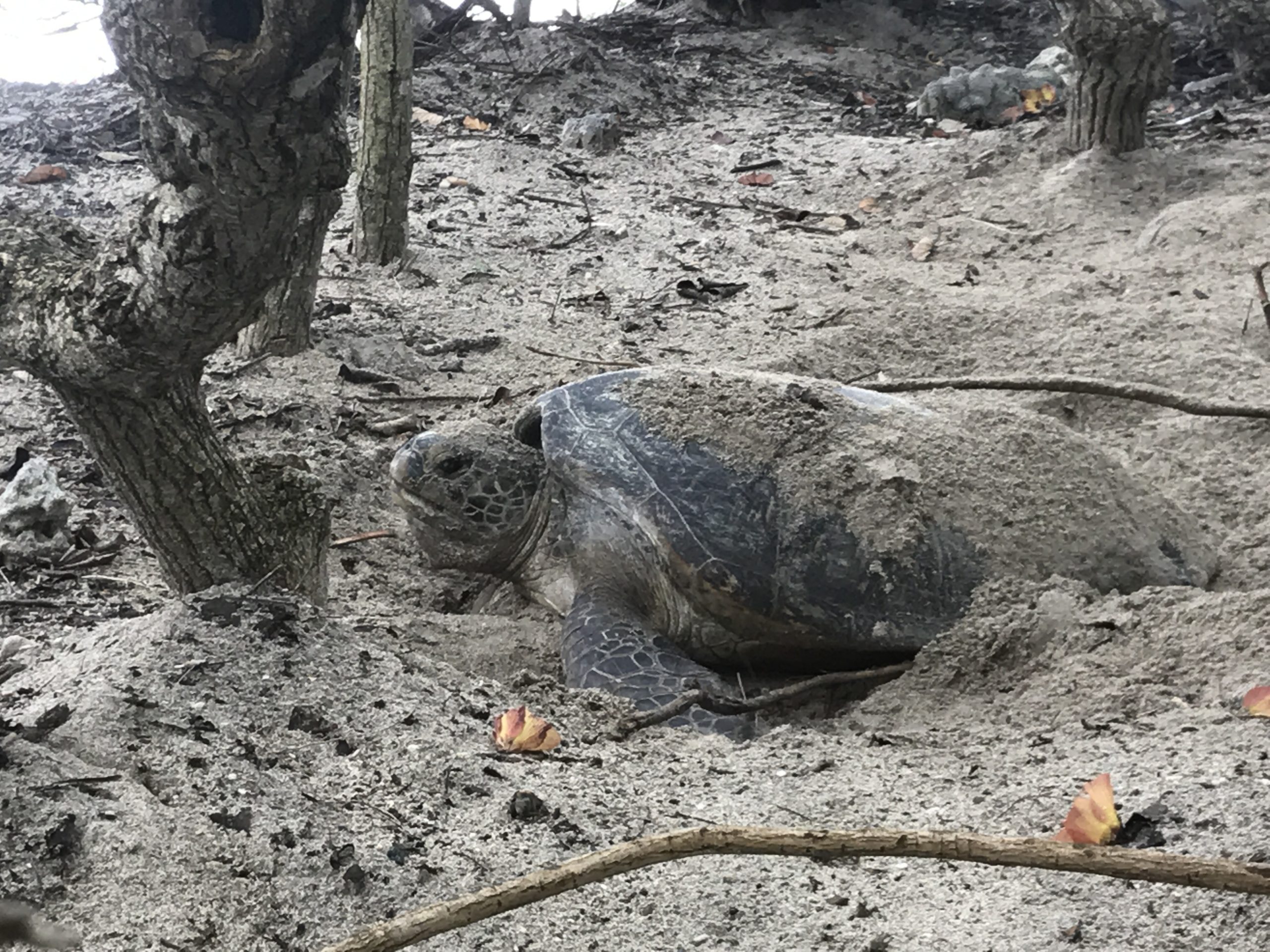 Kitayama: I think during this period it’s relatively easy to watch sea turtles come out of the ocean to lay eggs. But, for islanders, sea turtles are nothing out of the ordinary. Islanders maintain a proper distance and go about their lives without getting any closer than they need to.

However, it’s not as if they’re not interested in sea turtles. There are many who voluntarily pick up garbage that’s been washed ashore after a typhoon. There’s a deep-rooted awareness of protecting not only sea turtles, but all the nature and creatures on the islands.

If you visit supermarkets and shops on Chichijima, you’ll see posters put up showing drawings of sea turtles and the words, “Don’t shine lights on turtles.”

Kitayama: These posters are made every year by the students of Ogasawara Elementary School. The children learn about sea turtles for a year. We staff at Ogasawara Marine Center also work as teachers.

Kitayama says to be sure to come to the Ogasawara Marine Center if you want to learn about green sea turtles and marine life on the Ogasawara Islands. The center is located right next to Seihyo Beach, which is known as a breeding ground for branch coral and is on the opposite shore from the docking site, Futami Port. The Ogasawara Marine Center has an exhibit area that uses photos and panels to introduce the ecology of green sea turtles and other marine life on the Ogasawara Islands, and a breeding area where sea turtles are actually bred. The center also offers a two-hour Sea Turtle Class. Visitors can hear a lecture on the ecology and history of sea turtles and try polishing sea turtle shells. Listening to a lecture

Kitayama: We also sell food for the sea turtles, so visitors can feed them. The baby sea turtles are omnivorous, so their food is a mix of seafood that has been finely chopped. The food for adult sea turtles is cabbage, because when they grow up their preference changes as they become herbivorous. The baby turtles that once could fit in two hands grow as big as a meter as adults. The sight of their large bodies and round heads bobbing as they eat cabbage floating on the water’s surface is quite mesmerizing. In addition to protecting sea turtles, on the Ogasawara Islands steps are taken to prevent the introduction of non-native species in order to protect the unique ecosystem, and environmental conservation activities are carried out, such as safeguarding breeding grounds for endemic species.

The hands-on experience of releasing green sea turtles gave us a taste of life on the Ogasawara Islands where plants, animals, and people live together while maintaining an agreeable distance from one another.