A beech forest unchanged for 8,000 years

Shirakami-Sanchi is the collective name for the mountainous area that straddles Aomori and Akita prefectures in northern Japan. It covers an approximately 130,000-hectare area and has the largest expanse of virgin beech forest in East Asia.

This beech forest is said to have been formed around 8,000 years ago and retains its primeval form even today, having never been cut down or developed. This natural forest untouched by humans is home to large mammals such as Japanese serow and Asian black bear, and over 80 bird species including the rare black woodpecker and golden eagle. It creates a rich ecosystem. In recognition of this invaluable natural environment, an area of Shirakami-Sanchi that retains especially dense primeval nature (16,971 hectares) became a registered World Natural Heritage in 1993.

Keita Suganuma, who is a guide for the Akita Shirakami Guide Association, says the appeal of Shirakami-Sanchi is that this once-common landscape exists even today.

Suganuma: Beech trees were not at all rare in northern Japan. In the past, various beech forests similar to Shirakami-Sanchi existed in Japan. They’re sure to have been a common landscape, but were cut down for development and replaced by artificial Japanese cedar forests to use as building materials.

About two-thirds of the land in Japan is woodland. Of that, around 40% is artificial forest. Since humans have intervened in most of the remaining natural forests, the existence of a consolidated area that can be called untouched virgin forest is very valuable. Broad-leaved deciduous trees dominated by beech form the forest of Shirakami-Sanchi. Since the leaves fall all at once in winter, there are clear changes in the trees throughout the four seasons.

Suganuma: In Shirakami-Sanchi, you can see the beech trees turn color in autumn from early October to the beginning of November. The leaves turning from green to yellow, brown, and dark brown is a truly beautiful sight.

Suganuma: The autumn colors peak every year in late October. During those few days, the entire beech forest is so radiant, it appears to be glowing a golden color.

Before visiting Shirakami-Sanchi, you should familiarize yourself with the zones established to protect the ecosystem. The World Natural Heritage area is divided into the 10,139-hectare core zone and the surrounding 6,832-hectare buffer zone.

Suganuma: The value of Shirakami-Sanchi lies in the fact that the virgin forest remains untouched. Access to the mountains is rigorously restricted to keep that forest, particularly in the core zone.

There’s no route offering general access to the mountains from the southern part of the World Natural Heritage area, the Akita Prefecture side, excluding for reasons such as academic study. From the Aomori Prefecture side in the northern part, you can only enter the mountains from designated routes, but you have to apply in advance to the District Forest Office (only available in Japanese).

There are several mountain entrance points for the heritage site that allow general access, such as Mt. Futatsu-mori, Anmon Waterfalls, and Mt. Shirakami-dake trailhead, so you can enjoy mountain climbing and hiking.

The hiking course for Mt. Shirakami-dake, which is 1,235 meters above sea level, has steep gradients and slopes in some places and is a serious mountain trail. Mt. Futatsu-mori offers easy hiking that takes about an hour one way, but even that is 1,086 meters above sea level. It’s best to be prepared with hiking shoes and raingear. In the World Natural Heritage area there is difficult hiking that at times requires river trekking and forging through thatches of grass, so be sure to confirm the hiking route and consider entering with an experienced person or guide. In addition, you should prepare a packed lunch in advance since there are few shops or eateries in the area around the various trailheads, and take home all trash.

Incidentally, there are also beech forests outside the buffer zone. Well-known tourist spots are scattered about, including Lake Juniko that has 33 lakes and ponds here and there, and a giant 400-year-old beech tree in Dakedaibuna Natural Forest, which has maintained pathways. Hikers can view the same nature found in the buffer zone and core zone, but here there are numerous well-kept, easy-to-traverse courses. It’s recommended for people who want to easily enjoy hiking.

Hiking in a golden-colored beech forest

Shirakami-Sanchi is a range of mountains with relatively low elevation of around 1,000 meters, such as Mt. Mukai-Shirakami-dake (1,250 meters). You can enjoy a panoramic view of the expansive beech forest if you climb the mountains, but Mr. Suganuma recommends hiking among the autumn colors.

When you enter the beech forest in autumn, you’ll immediately be amazed at the brilliance. Normally the sun’s rays are blocked by the beech tree branches stretching out in various directions. However, during the period the autumn colors are their prettiest, the golden-colored beech tree leaves spread over so much of the area it’s dazzling. In addition to beech trees, you can also see Mongolian oak (Quercus mongolica) with acorn nuts, Japanese wingnut (Pterocarya rhoifolia) with small leaves that grow facing each other, and Japanese sumac (Toxicodendron vernicifluum) whose sap is used as a coating material. The leaves of the Japanese sumac especially stand out among the beech forest because they turn red. Suganuma: The autumn season in Shirakami-Sanchi is long. It continues from late September to the beginning of November. In places at 600–700 meters elevation, first the Japanese sumac leaves turn red in early October. Afterwards, the autumn colors of the beech trees reach their peak in late October.

In November, the beech forest that is devoid of leaves is called a silver forest because the light, gray-colored trunks and branches appear silver. After the leaves fall, you can discover a beech forest landscape only seen in this season that’s different from when it’s covered with leaves.

Akita and Aomori prefectures, where Shirakami-Sanchi is located, is a region of Japan that experiences extreme cold. The average temperature in October is 13ºC. It can snow after mid-November, so you’ll be more protected when hiking if you have a thin down jacket that you can put on and take off.

When hiking in the beech forest, be sure to not only view the autumn leaves that fill the sky, but also pay attention to the nature hidden at your feet. Suganuma: The surface of beech tree leaves grows facing up toward the sky to catch rain. The rain caught by the beech leaves reach the branches and trunk, then fall to the earth along with various substances that adhere to the leaves and branches, and provide moisture to the roots. This is called stemflow. Also, when leaves fall to the ground, they’re broken down by creatures in the soil and turned into leaf soil that contains an abundance of moisture and minerals.

It’s said that in Shirakami-Sanchi approximately three tons of dead leaves fall per hectare every year. The concentration of fallen leaves accumulates as leaf soil. The water from streams filtered by leaf soil is so pure it’s crystal clear. If you look at the water’s surface, you can easily see fallen beech leaves that have sunk to the bottom.

Suganuma: Mushrooms and edible wild plants grow well in forests with high humidity. If you look, you’ll likely find nameko mushrooms growing on fallen beech trees. They’re often used in miso soup and traditional home cooking familiar to the Japanese. Nameko mushrooms have long been an ingredient used by the people who live in this region. The people who originally lived in this region referred to Shirakami-Sanchi as ‘oraho no yama’ (our mountain). That’s because Shirakami-Sanchi was a place indispensable to the lives of the local people. They regularly went to the mountain, picked edible wild plants and mushrooms, and hunted wild animals such as bears as sources of sustenance.

Suganuma: There’s a history of people’s lives being supported by the blessings of the forest. I think that’s precisely the reason Shirakami-Sanchi has never been developed and could be maintained up to today in its virgin state.

Also, take a look down by your feet and you’ll realize there are beech nuts about a centimeter in size scattered around, mixed among the dead leaves.

Suganuma: Beech nuts are highly nutritious and are a favorite food of forest animals, but humans can also eat them. Peel the shell and pop them in your mouth. They taste like walnuts. Suganuma: It’s said that beech nuts alternate between growing in abundance and growing poorly every five to seven years. When the beech nuts are abundant, the food for the forest animals increases and they reproduce well, but in a bad year they don’t. I think that the alternating abundant and poor growths keep the number of forest animals constant.

Interestingly, bears are the animals that love beech nuts. In the World Natural Heritage area, it’s possible to encounter a bear, so it’s recommended you walk along while ringing a bell used to keep away bears and talk to your hiking companions. That reduces the chance of bears approaching.

Leave the untouched nature in its untouched state

The period approximately 8,000 years ago when the present ecosystem of Shirakami-Sanchi formed coincides with the age when a hunter-gatherer culture was born in this region. You can imagine that the existence of Shirakami-Sanchi provided a foundation for people’s lives at that time.

Suganuma: We sometimes explain Shirakami-Sanchi to children who come to observe as a part of the school curriculum, but it’s quite difficult to communicate the appeal of this nature in words. As much as possible, I like to convey the appeal by having them enter the forest and use their senses to hear the bird’s sing, feel the leaf soil, and smell the plants. 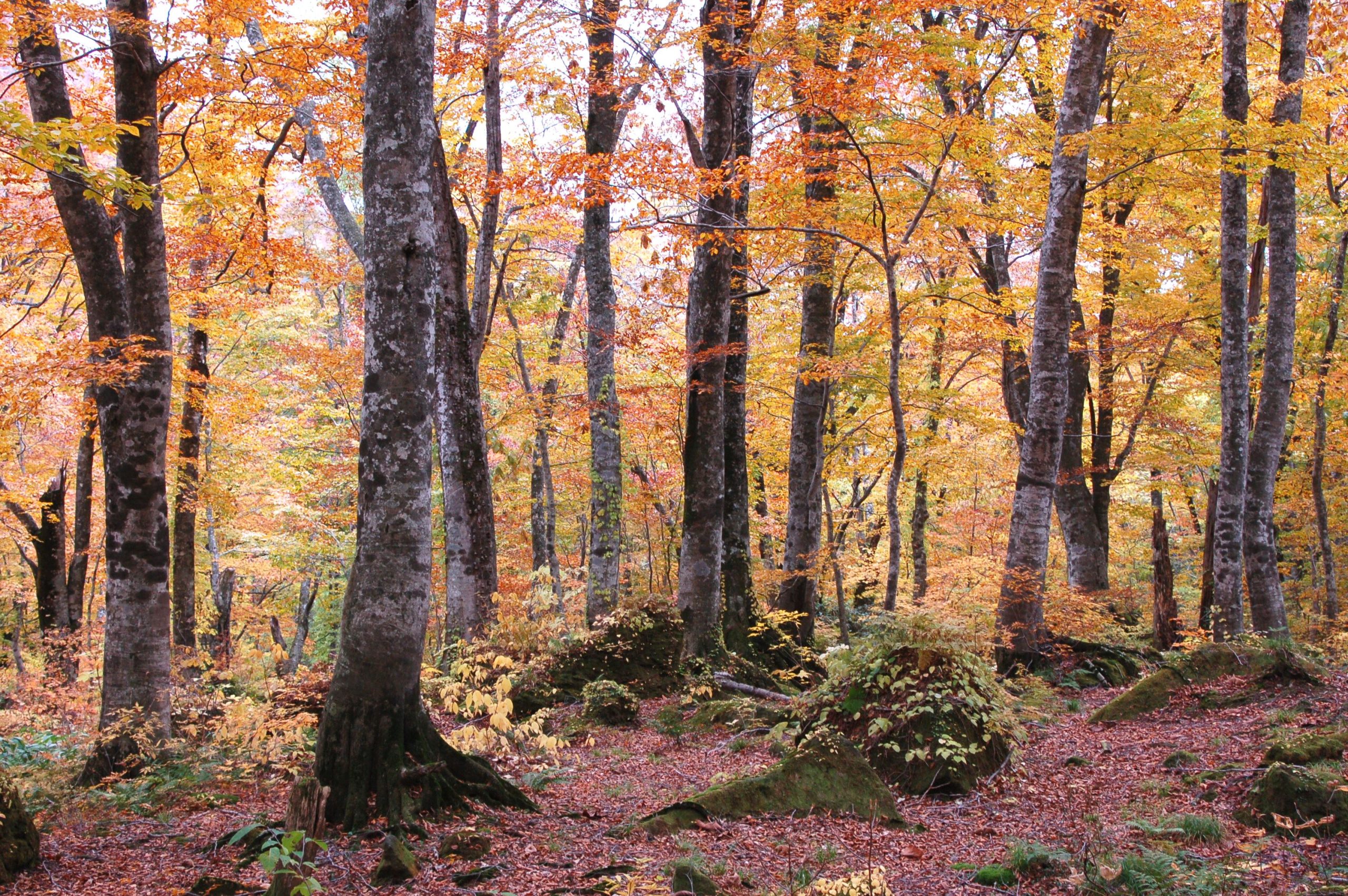 Mr. Suganuma says he wants visitors to first get to know Shirakami-Sanchi so they can protect its nature.

Suganuma: We sometimes enter the core zone to study the ecosystem and conduct patrols to protect the environment of the World Natural Heritage area. To leave the untouched forest to future generations, I’d like for visitors to actually see and touch the forest themselves to understand why Shirakami-Sanchi was registered as a World Heritage and why it’s considered important.

Shirakami-Sanchi was created around 8,000 years ago and still retains its primeval state. The Japanese people who lived in this region in ancient times perhaps saw the same landscape of autumn colors in the beech forest that we see today.