Hokkaido is situated at the northernmost part of the Japanese islands. In the eastern area is a long, slender peninsula that protrudes into the Okhotsk Sea. This is the Shiretoko Peninsula that measures approximately 70 km in length and about 20 km in width.

Shiretoko was formed when submarine volcanoes became active around 8.6 million years ago. Volcanic activity on land also began approximately 250,000 years ago, forming a string of mountains, such as Mt. Rausu-dake and Mount Sashirui-dake, standing 1,500 meters or more above sea level in the middle of the peninsula.

In addition, Shiretoko is the furthest south in the northern hemisphere where drift ice approaches the coast. Every year from late January to March, the drift ice comes close to the shore and pure white ice floes spread out from the shoreline to the horizon. The drift ice is extremely important to the creation of Shiretoko’s ecosystem. First, the phytoplankton called ice algae that adheres to the bottom of the drift ice breeds in abundance throughout the sea come spring.

The ice algae then becomes food for zooplankton, and the salmon and trout that eat it return from the sea to migrate upstream. In turn, they become food for animals such as brown bears, foxes, and wild birds, and the nutrients from the sea are brought to the land. The cycle of the ecosystem that depends on this food chain supports the sea and rich forest on the Shiretoko Peninsula. 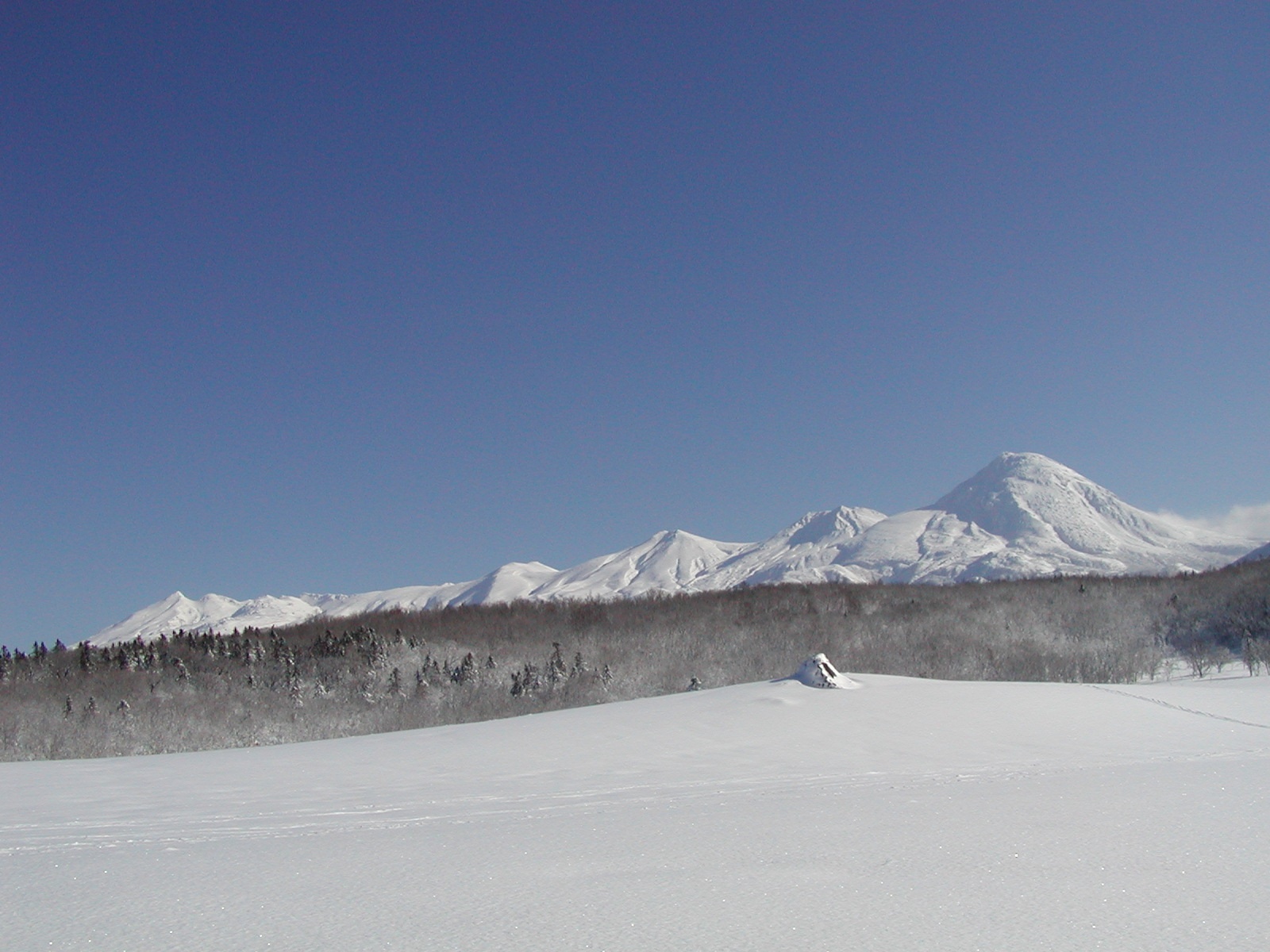 Mountains on the Shiretoko Peninsula

To get a close-up feel for this ecosystem on Shiretoko, we recommend you participate in a drift ice walk and drift ice bird watching held from February and March when the drift ice reaches the shore.

Nao Iwayama moved to the Shiretoko Peninsula after becoming enthralled with the beautiful drift ice. He has been a nature guide on tours such as drift ice walks for over twenty years.

Iwayama: On drift ice walks, participants can enjoyably experience the ice in their own way, such as walking or laying down on the drift ice. Iwayama: Together with the drift ice walk, lots of people also participate in forest walking tours, including watching for wild animals in winter and snowshoeing. In the forest, you can see wild animals with their winter fur coats, such as the Ezo red fox (Vulpes vulpes schrencki), the Eurasian red squirrel (Sciurus vulgaris orientis), and the Yezo sika deer (Cervus nippon yesoensis), as well as the wild bird, the Eurasian jay that has beautiful, cobalt-blue feathers on its wings. It’s precisely because this is a place where numerous wild animals live that people who visit must keep a careful distance from the animals. One of the rules visitors must comply with is about feeding them.

Iwayama: There are some animals that will approach visitors’ cars, but you shouldn’t get extremely close to feed them. Once the animals are given food, they no longer are afraid of people and cars.

Because of that, sometimes foxes and deer run into cars and die, and it also causes bears to enter residential areas in search of human food.

In addition, eating while walking outdoors and leaving trash attract wild animals. Such behaviors are prohibited. It’s important for every single person to take care in order to protect the lives of innocent animals.

Only in Winter: Take a drift ice walk to experience seals and clione up close

The drift ice walk is about a 90-min. tour. First, you put on a diving dry suit at the shore and do some warm-up exercises.

Iwayama: The dry suit is worn over your clothes. It has excellent heat retention and water repellence. Even if you fall into the sea, the dry suit will act like a life preserver so there are no worries about drowning. Actually, many participants have fun floating in the sea and swimming between the drift ice. Iwayama: You’ll be safe if you wear a dry suit, but walking on drift ice just in your clothes is very dangerous. If you were to fall into the sea, it’s difficult to get on top of the thick drift ice and you could drown.

The average temperature in February, the coldest month in winter, is minus 5–6 ºC when the winter temperature drops to its lowest. It likely feels even colder on top of drift ice where there is nothing to block the cold.

Moreover, there is snow on top of the drift ice and it’s slippery. You should be prepared with a thick knit cap to prevent injury should you fall.

Once all the preparations are in order, you can set foot on the drift ice. The drift ice that reaches the shore lie atop one another just like waves, and are thrilling when seen up close. There are even huge chunks of ice that are nearly 2 meters long.

Mr. Iwayama instructs participants about how to have fun while putting them at ease, jumping from drift ice to drift ice, and demonstrating how to lay on top of the ice. Iwayama: We spend about an hour on top of the drift ice. It’s shaky footing, so the distance you can walk is about 300 meters. It also feels fantastic to sit down on the drift ice and leisurely look at the surrounding scenery, and lay down and look at the vast sky. Though you’re on the sea, you can’t hear the sound of waves. Instead, if you listen you can hear the drift ice ‘chirp’ as they rub against one another, with wild bird cries mixed in once in a while.

After having fun on top of the drift ice, try getting in the water from a crevice in the drift ice. Mr. Iwayama says, “If you float in the sea on your back with your hands folded on top of each other like an otter, it’s safe and you’ll feel secure.” Iwayama: When you’re floating in the sea, sometimes clione, also called ‘drift ice angels,’ will swim right up to you. You might also see seals. They’re very curious and will pop their head out from between the ice. Being able to detect the presence of sea animals is one of the ways to enjoy a drift ice walk. According to Mr. Iwayama, the amount of drift ice that comes close differs each year. He says there’s no way to predict how many drift ice can be seen each year. In some years, there are few drift ice and an expanse of the water’s surface is visible even in the coldest month of February, while in other years thick drift ice remain even in late March.

The drift ice walk is held twice in the morning and twice in the afternoon. Drift ice appears different, depending on the weather, temperature, and time period of observation. Mr. Iwayama shares that in evenings on clear days the sun setting into the drift ice is especially spectacular.

Iwayama: If you join an evening tour, you can float in the sea in a dry suit and watch the drift ice and the sky stained orange. When the sea’s surface is lit up by the sunset, it shines like it’s an orange-colored mirror. It’s truly an otherworldly sight. There are large mammals on the Shiretoko Peninsula. Brown bears live on land, and whales live in the sea. Being at the top of the food chain, their lives mutually impact the many other wild animals. These include raptors (wild birds) designated as endangered species, such as Blakiston’s fish-owl (Ketupa blakistoni), the Steller’s Sea Eagle (Haliaeetus pelagicus) and White-tailed Eagle (Haliaeetus albicilla).

The Steller’s Sea Eagle and White-tailed Eagle especially are birds representative of Shiretoko in winter and begin appearing from early November. The Shiretoko Peninsula in winter is the world’s largest winter spot for the Steller’s Sea Eagle and White-tailed Eagle, as shown by Mr. Iwayama’s comment, “If you look up, on some days about a hundred per hour flow across the sky one after another.” Both use the seasonal wind to migrate from places such as Sakhalin and the Kamchatka Peninsula. Iwayama: For the few months from around November until the drift ice arrive, there are violent, lead-colored waves in the Okhotsk Sea. The sound of the waves reverberates so loudly that it’s even scary when inside your house, but at a certain point the sound suddenly disappears. That’s the sign that drift ice has arrived at Shiretoko. When the calls of the Steller’s Sea Eagle and White-tailed Eagle ring out on the quiet sea covered by white drift ice, it feels like the drift ice season has begun.

There are only around 5,000 Steller’s Sea Eagle in the world, but of those about 700 migrate to Shiretoko in wintertime.

Iwayama: At this point, during the drift ice season there’s a 100% chance you’ll see the Steller’s Sea Eagle and White-tailed Eagle on Shiretoko. The Steller’s Sea Eagle is a huge bird with a wingspan of over 2 meters. It’s one of the biggest birds you can see in Japan. It’s characterized by a black-and-white contrast on its wings and a sharp, bright-yellow beak. Bird watchers come from all over the world to get a glimpse of that bold, strong appearance. Compared to the Steller’s Sea Eagle, the White-tailed Eagle is somewhat small with a wingspan of around 2 meters. It’s distinguished by only its tail being white. Although it’s a migratory bird, some breed on Shiretoko, so you can see the bird throughout the year. Iwayama: Viewing not only the sea and sky, but also the forest from drift ice is a special experience exclusive to winter. Brown bears that hibernate in winter will wake up as early as late February to early March and start being active. If you’re lucky, you may run into a brown bear or Yezo sika deer that has come down from the forest. You might also discover the footprints of an Ezo red fox or a nocturnal Japanese sable (Martes zibellina brachyura) on top of drift ice.

Iwayama: The Ezo red fox sometimes comes to drift ice looking for fish and kelp that have washed up on it. Also, you’ll see Yezo sika deer that ride on drift ice and die because they drift with the ice and are unable to return to land. But even their carcasses will at some point probably become food for brown bears and wild birds.This is also one of the cycles of life brought by the drift ice.

The eyes and hearts of visitors are undoubtedly enraptured by the magnificent landscape that can be seen specifically because of the harsh natural environment, and the sight of animals withstanding the cold to thrive.

Getting to the Shiretoko Peninsula takes more than six hours by car from Sapporo, the central city in Hokkaido. From Tokyo, it takes an additional two-hour-plus bus ride even after arriving at the closest airport, Memanbetsu Airport. Even so, “Many people take the time to visit just to see the drift ice,” says Mr. Iwayama.

You can participate in a drift ice walk or drift ice bird watching to gain a deeper sense of the blessings brought by the drift ice that travel from the sea to rivers, and on to the forest to nurture the natural ecosystem unique to Shiretoko.

Back to Shiretoko Page